Redemption for Ave as He Claims GT-3 Runoffs Title 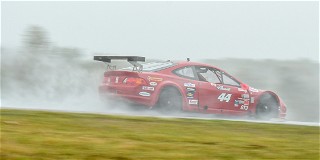 Tony Ave is hardly new to the SCCA National Championship Runoffs. In his nine previous appearances, he has scored two Runoffs poles and two gold medals — all of which came in GT-1. In GT-3, luck hasn’t been on his side, finishing 11th and 7th in his two previous attempts in the class. At this year’s Runoffs — during the final Hagerty Race Day at VIRginia International Raceway (VIR) — that all changed.

“I just love the class,” Ave, from Maiden, NC, said not long after spraying Mazza sparkling wine from the top step of the podium wearing his third Runoffs gold medal. “It's our third [time to run the class]; we led two other ones, and we broke both times. I was very happy — very happy.”

Qualifying indicated that the GT-3 race might go differently. Jeff Dernehl, who had competed at the Runoffs 13 times before this, claimed the Tire Rack Pole in his No. 63 Roswell Outback Auto/RRE/Hoosier Mazda RX-7 with a healthy gap to second-place qualifier and defending GT-3 National Champion Troy Ermish in his No. 38 Rebello Racing/Goodyear Nissan 350Z. Ave sat third on the grid in his No. 44 Acura RSX, more than two seconds off the pace.

In GT-3, Mayer was piloting the No. 77 Audi RS3 LMS car — a front-wheel-drive TCR car running on rules-mandated DOT street tires. Considering rain was falling as the field took the green flag, many were eyeing the driver with the unique GT car from Harleysville, PA, who had qualified ninth.

At the green flag, Ermish got the jump, but Dernehl retained the top spot, with Lewis sweeping into third, pushing Ave to fourth. Heading into Oak Tree Curve for the first time, Mayer had already splashed his way into second, leaving Ermish and Lewis in his wake and setting his sights on Dernehl.

Meyer sliced to the inside of Dernehl on lap two at Oak Tree Curve, claiming the lead and running away in an increasingly wet race. Two laps later, Meyer was sporting nearly a five-second lead over Dernehl, with Lewis in third, chased by Blake Wilson and Blake’s father Stacy Wilson.

Lap five brought the one thing Mayer didn’t want to see: a full-course caution. The caution was called to reset the tire barrier in the Snake section of the course and clean fluids from the track surface after Ken Nelson suffered an incident. The caution soon became a black flag at the 17-minute mark of a race limited to 40 minutes.

The race restart came with 15 minutes on the clock, so chances were slim that the race would go the full 15-lap distance. With the green, Dernehl jumped back into the lead, but Mayer kept his line tight through Turn 1 and regained the top position.

Something happened during the caution, though: Ave could now see. A fogged windshield had cleared up, and Ave went to town, gobbling up spots and claiming the lead in no time.

“When we went [after the black flag], I went absolutely as hard as I could go to get to the front,” Ave said. “I was afraid somebody was going to spin, and we’d have a yellow. Another one would be the end of [the timed race].”

The increasingly large puddles proved too much for Mayer’s car, with the Audi sliding into the tires in Turn 3 on the final lap. Then Dernehl exited the track’s surface, advancing Blake Wilson in his No. 33 Wilson Racing Mazda RX-7 to second. Mayer recovered to finish third.

“Surprisingly, there was more grip than I thought there would be,” Blake Wilson, from Englewood, TN, explained after finishing second at the Runoffs in his first-ever experience driving on a wet track. “The biggest thing was just trying to keep it in a straight line and keeping it on the track. That was the key.”

Mayer, finishing third, was concluding a very busy week at the Runoffs running both Formula Atlantic and GT-3. “It's an entirely different car,” Mayer said of his FA and GT-3 cars. “[The GT-3 car is] a lot of fun to drive because of the different aspects that it has. It's really cool learning the two polar opposite spectrums to race.”

As for his off on the last lap: “A little bit of mist on the track was perfect,” Mayer explained. “When we got started, I had a ton of grip, and that's how we got away ... but we had that caution and [Ave] came up and took it over.”

Dernehl recovered in time to claim fourth and was followed by Tony Rivera. Alex Mayer claimed the Sunoco Hard Charger Award with his run from ninth to second position.

Photo caption: Despite the mist, Ave saw his way to the win in GT-3.