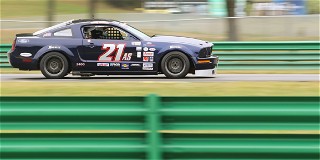 Rezzetano, a two-time Runoffs Champion from Phoenixville, PA, earned the pole position driving his No. 37 Phoenix Performance/Hoosier/Hawk Ford Mustang GT. Sitting outside on the front row was two-time champion Greg Eaton of Woodbridge, VA in the No. 21 Eaton Racing and Development Ford Mustang.

Behind them in third was Daniel Richardson of Derwood, MD in the No. 22 Hoosier/AutoGear/Hayworth/Anze Chevrolet Camaro, next to Clark Cambern of Dewitt, MI in the No. 78 Bilstein/Dodge/Wesley Motorsports Dodge Challenger.

The third row included Thomas West of Standish, ME in the No. 56 Limerick Machine/Goodyear Cadillac CTS-V alongside eight-time Runoffs champion and 2015 SCCA Super Sweep winner Andy McDermid of Howell, MI in the No. 24 WeatherTech/Felice Performance Ford Mustang.

From the green flag, it was apparent that the track was no one’s friend. Rezzetano jumped out to an early lead with Eaton following closely into Turn 1. The field tiptoed cleanly through the first corners, but American Sedan rewards bold driving and Eaton made a pass on Rezzetano on VIR’s long back straight to take over the lead. In the third lap, Rezzetano made a brave move to retake the front spot at VIR’s Oak Tree corner, where the track turns around at the top of the hill. Rezzetano went to the inside and contacted Eaton, causing both cars to go off opposite sides of the track.

“I knew Greg was going to be coming no matter what,” Rezzetano said. “Having the pole was great, but he has straight line speed on me so I had to be free of him by the time I got to the back straight, and I wasn’t. So I knew I was giving up the lead no matter what. It was unfortunate that we caught wheels on each other, and it bounced me off into the grass.”

That bounce put Richardson in the lead for the next few laps, but a mechanical failure in the first corners of the fifth lap coasted him to a halt trackside. The lead passed to Cambern, who had a 1.558-second gap over Eaton at the start of the sixth lap. Then Cambern spun off in Turn 1, putting Eaton back into first position and Andy McDermid passing by to take up second place, with West following in third.

“I lost the race in Turn 1,” Cambern said. “Our car takes a long time to fire up the tires. Initially my plan was just to hang out, stay with these guys, and not let them get away. The car had just started to wake up and really work, and when I went into Turn 1, I touched the black sealer on the pavement and the rear tires just locked. We lost all our tire temp. It was bad.”

Eaton had the measure of the course at that point, and opened a lead of 7.598 seconds in the next lap. Cambern recovered enough to retake second place, pushing McDermid back to third. In the eighth lap, Eaton extended his lead even further.

McDermid had his own moment in the 10th lap, going off at Turn 17, the right-hander leading onto the front straight. A long journey across the grass put him out of podium contention as West in the Cadillac took up third. At this point, Eaton had a lead of nine seconds, but Cambern and a resurgent Rezzetano began whittling that lead down in the final laps. By the 13th lap, Eaton’s gap was down to 7.894 seconds, then 4.9 seconds in the 14th. As the white flag flew, Eaton led by a slim 2.6 seconds.

When the drivers crossed the line, Eaton’s margin of victory was just 0.704 seconds over Cambern, with Rezzetano finishing third 3.5 seconds later. West survived to finish fourth, and McDermid rounded out the top five.

“It was just a fight,” Eaton said. “It’s pretty much a relief now. I think I aged about five years in the last month. It’s ultra-special for a guy like me to race against guys like these.”

The top three were greeted at the victory podium with a bottle of bubbly form Mazza Vineyards, the “Official Sparkling Wine” of the Runoffs.

The Sunoco Hard Charger award went to Kyle Gilbert in the No. 15 Chevrolet Camaro, gaining four positions during the race.

Below are final results for Sunday's AS race at the 2022 SCCA National Championship Runoffs, with finish position, starting position in parentheses, driver, hometown, car, and laps completed.