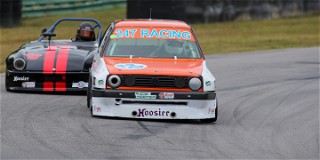 Few were surprised when defending H Production (HP) National Champion Steve Sargis earned the HP Tire Rack Pole in his Hoosier/Carbotech Triumph Spitfire at the 2022 SCCA National Championship Runoffs, adding another notch to his Runoffs pole tally that now stands at 14. That said, he certainly turned heads when he reset the VIR Runoffs qualifying lap record by nearly one second with a time of 2:13.952. None of this seemed to bother Chris Schaafsma, however, and he wasn’t shy to challenge Sargis once the race began, ultimately claiming his first SCCA National Championship title in a roller coaster of a race.

As the 21-car field headed toward the green flag on Oct. 1 during the second of three Hagerty Race Days at VIRginia International Raceway (VIR), Schaafsma pulled strong in his HoosierTireMidwest/NGP Racing/G-Loc Volkswagen Golf, retaining his second-place qualifying position behind Sargis in the opening turns — although Will Perry did briefly poke his Rivergate5speed.com Honda CRX Si into the battle through NASCAR Bend and Left Hook. Perry’s charge suffered a setback when he slid loose in Hog Pen, dropping him to 10th at the time.

As the race settled in, Sargis led Schaafsma by less than two seconds, with Enrik Benazik and his All Star Sheet Metal Honda Civic Si in fourth, and Eric Vickerman’s Goodyear/Midwest Motorsports Austin-Healey Sprite in tow.

Lap six saw Schaafsma make his move into Turn 1, bumping Sargis to second — now it was Sargis’s turn to apply pressure to the leader, periodically poking his nose to the inside.

Into the Oak Tree turn one lap later, Sargis initiated an excellent passing maneuver that culminated in pushing the braking zone into Roller Coaster, relegating Schaafsma back to second.

It didn’t last long, though, as Schaafsma returned the favor a lap later on a different portion of the track. “I got a great run out of Turn 4, so come Turn 5 and up to the Esses I was able to pull to the side [of Sargis],” Schaafsma explained. “I thought I cleared him when we went into the first [of the Esses], and as we went into the second right hand one, I thought I saw him in my mirror next to me – I was worried about taking us both out of the race.”

Rather than making contact, Schaafsma opted to straighten the wheel in the Climbing Esses, bounding through the grass and reentering the track – still ahead of Sargis.

Two laps later, Sargis dove into Turn 1 to take the lead once more.

Another heart stopping moment came in Hog Pen on lap 10 with Sargis up front. “I was hoping we wouldn't catch [lap traffic] at a bad spot,” Sargis explained. “I thought it was going to be a horrible time to catch [traffic], and then he waved me by on the outside. I probably would have stayed behind, but I couldn't stop, and I would have hit him.”

Sargis dove to the inside of the car, clipping the dirt, damaging his front bumper, and spinning off course. “The grass is a lot more slippery than I thought,” Sargis said of his slog back to the racing surface.

The off-and-on by Sargis handed a healthy lead to Schaafsma, with Silegren and Perry following; Sargis now fourth. Hammering down, Sargis soon passed Perry for third, leaving Perry to battle with Chris Albin and his Over the Limit Racing/Hoosier Volkswagen Golf.

As the laps ticked down, Sargis charged toward Silegren — a strategy that paid off on the penultimate lap when Silegren slid wide at Oak Tree, handing the position (albeit briefly) to Sargis.

“The last couple of laps, it started drizzling over [at the Oak Tree turn] — it started getting wet,” Silegren explained of the weekend’s unpredictable weather patterns, a result of the waning hurricane Ian as it passed through the area. “I was caught out there, and I slipped outside of the track a little bit. I got back on the track and started chasing [Sargis] – and then his car started missing, so I passed him on the back straightaway and just kept the pedal down.”

“It was a whole weird thing that happened — [the car] was missing at the end,” Sargis said. “It was just the last three or four laps, and it was only acting up on the back stretch. I don't know what it was.”

At the stripe, Schaafsma claimed his first SCCA Runoffs win with a huge lead over Silegren and Sargis; Perry, Albin, and Vickerman rounded out the top six. Jack Schulz earned the Sunoco Hard Charger Award for racing from the 20th position on the grid to 11th in the race in his Automotive Archeologists MG Midget.

As for winning his first SCCA National Championship, Schaafsma had this to say: “It feels like climbing a mountain.”

This is a feat Schaafsma has been working on for a while. “We had a [Runoffs] podium in 2017 — [my] first Runoffs,” he explained. “I broke at the 2019 Runoffs here [at VIR] on the formation lap. I crashed out of the lead at the Road America Runoffs [in 2020] and finished second last year [at Indianapolis Motor Speedway]. I thought we were there, but we weren't getting it.

“And this year, despite the weather trying to give us a little bit of heartburn, everything just kind of went the way we planned it. We tried to not make mistakes — even though I made one, I got away with it.”

The top three were greeted at the victory podium with a bottle of bubbly from Mazza Vineyards, the “Official Sparkling Wine” of the Runoffs.

Photo caption: Chris Schaafsma leads Steve Sargis on the way to the win in H-Production.