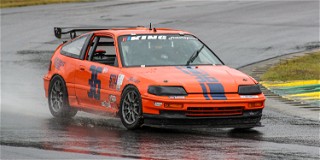 Wet conditions persisted and the wind’s pace picked up Friday afternoon as Super Touring Under (STU) drivers filed off grid and onto the track for their Hagerty Race Days contest at the 59th SCCA National Championship Runoffs taking place Sept. 24-Oct. 2, 2022, at VIRginia International Raceway (VIR) in Alton, VA.

Having earned the Tire Rack Pole Award, Johan Schwartz had the advantage of being out front of the 19-car field to start the race. Flanking Schwartz’ No. 4 VanSteenburg Performance Porsche 944 was defending STU National Champion Joe Moser in the No. 36 King Motorsports/Hoosier/Carbotech Honda CRX.

Turn 1 belonged to Schwartz. He also made it through Turns 2 and 3 with the lead. But Turn 4 was too tricky, and Schwartz slid off the circuit, handing the lead to Moser. Hot on Moser’s tail was Mark Liller, who started sixth in the No. 19 AngrySheepMtrSprt/Hoosier/Carbotech Dodge Neon SRT-4.

Working through Turn 1 on the second lap, Liller was able to make it around Moser for the lead. But a full-course yellow came out on lap three, and Liller had dropped all the way back to fifth when the pace car took control of the field.

Moser, of Dallas, TX, was back out front as cars were pulled into pitlane and parked for an extended delay resulting from oil being laid down around nearly the entire 3.27-mile, 18-turn circuit. Behind Moser was the No. 18 Carbotech/Hoosier/MCS Subaru WRX STI of Chip Herr, the No. 72 Krugspeed/Geraci Stone Gallery Lotus Exige of Anthony Geraci, and Jayson Nazario’s No. 80 El Pelao Racing Honda Civic.

Unfortunately, the cleanup process was too extensive, and STU was unable to return to the track within the race’s allotted time. With the checkered flag waved, cars pulled off pitlane and back into the paddock.

With that, Moser defended his STU National Championship while earning his fourth Runoffs win.

“Liller lost it on the oil slick,” Moser recalled after picking up his gold medal and bottle of Mazza sparkling wine. “I got back around him, and then I saw the oil out there. I straddled it up the esses and came up on the safety car. It was great to be in the right position at the checkered flag, and I’ll take it. In retrospect, I probably wouldn’t have held on to the lead the full race.”

Herr, of Lititz, PA, actually started at the rear of the field after swapping cars. He came to the Runoffs with an Audi A4, but ran the Subaru WRX STI after experiencing some transmission problems with the Audi. His runner-up finish Friday was a second Runoffs podium appearance. The effort also earned him the Sunoco Hard Charger award.

“I started dead last, which means the only thing I could do is go forward,” Herr said. "My car was superior in the wet, which can be attributed to the all-wheel drive. STU is a great class, and I’m really looking forward to grabbing that top step one day.”

“We had a really good start, and worked our way right to the front,” Geraci said. “I was finding the grip on the track, and just being patient through the corners. We had a great shot, and it would’ve been fun fighting these guys to the end.”