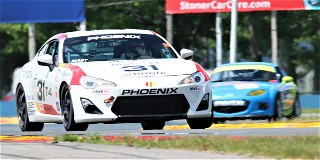 Hoosier Racing Tire SCCA Super Tour’s penultimate round in its 10-event season for 2022 is going on June 3-5, 2022, at Watkins Glen International (WGI) in New York. Put on by SCCA’s Finger Lakes Region, Saturday’s action included 20-minute qualifying sessions in the morning for each of the seven race groups, followed by what was scheduled to be 25-minute contests around the sprawling 3.4-mile, 11-turn circuit.

There was hardly a cloud in the bright blue sky Saturday, and conditions couldn’t be better for racing. Temperatures were in the mid 60s, and winds were light at around 11 mph.

Five-Car Battle: Saturday’s opening race went to Spec Miata. Brian Henderson was on pole, but Nicholas Bruni had the lead after the entire 46-car field went two abreast through the first turn.

After four laps, five drivers had separated themselves out front. On lap five, Yiannis Tsiounis took the lead, followed by Bruni, Henderson, Elivan Goulart, and Travis Wiley in the No. 77 X-Factor Racing/Hoosier/G-LOC Mazda Miata. A lap later, Goulart moved to the front.

On lap 10, Goulart and Bruni were fighting for the lead headed toward the Inner Loop. Goulart ended up off track, and Bruni off the pace. That allowed Wiley, a First Gear Mazda Challenge championship contender, to shoot through for the lead as a full-course yellow came out. The contest then ended under the caution flag.

“The whole race we were just managing tires,“ Wiley said. “Once we worked our way up, I just followed and waited to see if anyone made mistakes, and capitalized on it.”

Delayed Gratification: The day’s second race group, Spec Racer Ford Gen3 (SRF3), had an interesting development. The event got underway with polesitter Sandy Satullo III taking the lead, followed by 35 fellow competitors. On lap three, however, Caleb Shrader moved to the front, followed by Charles Russell Turner in the No. 23 PCS car.

At that point, there were multiple incidents on track, and the race was stopped to clear stranded vehicles from the racing surface. There was a very long delay as tow trucks made several trips out on to the track, then circled back to deposit cripple vehicles in the paddock with each visit. Of the cars that started the event, only 22 completed all eight racing laps.

When the event restarted, it was a three-lap shootout to the finish. On the final racing lap, Turner managed to get by Shrader while heading into the Inner Loop. Satullo also got by to claim the runner-up spot.

“Caleb was running super consistent, and he actually had me covered. I was just using the draft to keep up with him,” Turner said. “On what I thought was going to be the white-flag lap, I got a good run on Caleb and took the lead … but I expected on the next lap him and Sandy would be coming back around me. But I came around to the finish line and they were waiving the checkered flag.”

Prototype 2 Shares Lead: By their own admission, Prototype 2 (P2) drivers William Niemeyer Jr. and Pat Wildfire always have good, fun, tight races. Sure enough, that happened again Saturday during their contest, which was shortened to 20 minutes due to the long delay that occurred earlier in the SRF3 event.

Armen Megregian, driving a Ligier JS 51, was actually the P2 polesitter Saturday and held the lead for the opening lap. But he was having car troubles and gave up the front spot to Niemeyer before dropping out of the race. Behind Niemeyer, Wildfire was dealing with traffic and fell back by 10 seconds at one point in his AMAC P2 car. But once he got clear of that traffic, Wildfire made a hard charge and closed back up on Niemeyer, then actually took the lead with one lap left.

Getting passed by Wildfire caught Niemeyer off guard. But on the last lap, he was able to retake the lead and claimed victory in his No. 65 Superior Equipment Sorcerer machine.

“Pat is a great guy, a great racer, and I hate to beat the guy,” Niemeyer said afterwards. “My car was on rails. I thought, ‘well, I think I’ve got this.’ All of a sudden, Pat found a bunch of speed and closed in on me … then blew right past me. But three turns from the end … we were in traffic. Somehow, I got inside of him and squeezed by.”

Sampling Touring:  Marshall Mast is really enjoying the full SCCA Touring experience. He is the reigning Touring 3 SCCA Runoffs champion, swept the Touring 2 races just a month ago during the Hoosier Super Tour stop at PittRace, and won Saturday’s Touring 4 event at WGI driving the No. 31 Phoenix/Hawk/Hoosier Scion FR-S.

It wasn’t a cakewalk, however, as Mast spent the middle portion of the race running second and chasing Marc Cefalo in a Mazda MX-5. But with five laps remaining, he made the pass and went on to victory.

“That was full and intense for the whole 20 minutes,“ Mast admitted. “The Touring 3 traffic was a little bit of an issue to navigate. But me and Marc Cefalo had a great race, regardless. We traded the lead probably five or six times.”

More Racing Sunday: Another whole day of Hoosier Super Tour action from WGI starts Sunday at 8:55 a.m. Eastern Time with either 35-minute or 14-lap contests for each of the seven race groups. Follow the action live online at SCCA.com for enhanced timing and scoring, the Super Tour Radio presented by Hoosier Racing Tire broadcast supplied by Performance Motorsports Network, and a couple trackside video feeds.