Aquilante Start to Finish in T1 for 11th SCCA Crown 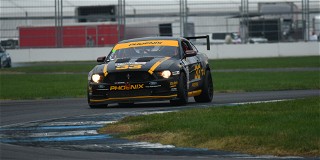 The T1 race at the SCCA National Championship Runoffs at the Indianapolis Motor Speedway road course was highlighted by a pair of breakaway battles. Andrew Aquilante of Chester Springs, PA, emerged with his sixth T1 gold, his 11th overall in Runoffs competition.

While Aquilante and Mark Boden scrapped over the race lead, Brian Kleeman and Daniel Bender fought for third, several seconds behind the lead duo. The third-place battle was resolved on the 12th of 19 laps, as Bender, from Northbrook, IL — driving a 2015 Chevrolet Camaro Z28 — overtook when Kleeman’s 2017 Ford Mustang FP350S ran wide at Turn 4.

The intense tussle for the lead continued even deeper into the race. Driving a 2005 BMW E46 M3, third qualifier Boden initially challenged Aquilante for the top spot at Turn 1 on the opening lap, only for Aquilante to vigorously defend his spot on the Tire Rack pole.

From there, Aquilante never edged away from Boden. The Mustang had a clear edge over the BMW accelerating out of corners, but Boden’s lighter, nimbler machine caught up by the end of the track’s two long straights and appeared better on the brakes. The gap between the two lead cars varied between 0.3 and 0.7 second as they gapped the third-place fight between Kleeman and Bender by eight seconds.

Approaching the end of the 17th lap, Boden’s BMW pushed wide as he accelerated onto the pit straight and contacted the wall on the outside. That brush on the left side caused tire a punctured tire, relegating the four-time SCCA National Champion to a 17th place finish.

Aquilante was left with a comfortable lead over Bender, and he reeled off the final two laps to finish his latest SCCA Runoffs triumph with an 8.272-second cushion.

“It feels like redemption, because this car let me down the last few years,” Aquilante remarked in a victory lane interview. “Indy is such a cool place, and to walk out on the podium here is a surreal feeling. I’m glad we get to do it.

“We knew [Boden] was going to come down the inside at Turn 1 because he has a lot more power than us,” he continued. “That was no surprise, but then it was just a matter of managing the tires, clicking off the laps, and waiting for him to make a mistake.”

The winner said he watched Boden in his mirrors throughout the race and noted that Boden appeared to copy his line through several corners. He also noticed that Boden started to struggle in the banked final corner leading on to the pit straight.

“He came up, but I knew we just had to manage and keep him back there,” Aquilante said. “I could see where he was using his equipment a bit more, so I tried to keep him doing that until I could get a break. I made the decision that he was going to have to drive through me to get the lead, but he tagged the wall and cut a tire. It was a matter of biding my time, not making a mistake, and trying to force him into a mistake. That’s what we got.”

Bender is a former T1 champion whose last Runoffs triumph came in 2014. “It feels great,” he said. “T1 is a tough class; Andrew is really a master of this class, and that car is so good. To bring it home in second place really feels good. We put a lot of work into this year. The goal was obviously to win, but I’ll take second place.”

Kleeman, a resident of Cockeysville, MD, was pleased to qualify on the front row. But he quickly realized he would not contend for the win on Sunday. “I was hoping we could do better, but it’s still pretty good,” he acknowledged. “Third place at the Runoffs is never something to complain about. We sort of missed on our race setup and burned up the rear tires. It got real loose and was just tough to hold on to. But we made the most of it and hung in there.”

Ian Barberi of Pleasanton, CA, finished fourth in a 1995 BMW E36 M3, while Edgar Lau from Sisters, OR, rounded out the top five in a 2018 Mustang Shelby GT-350. Clark Nunes moved from 20th on the grid to 11th place at the finish to claim the Sunoco Hard Charger Award.

Photo caption: Andrew Aquilante lights the way to his 11th SCCA National Championship with the T1 win at the Runoffs