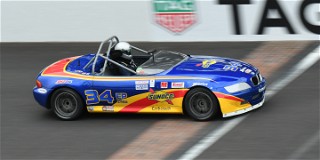 Prather led flag to flag from the Tire Rack pole in a 16-lap race that was slowed three times for full course cautions, including the race-ender on lap 15. The win is Prather’s fifth career title and second in as many years in his No. 34 JPM/Hoosier/Carbotech/Sunoco/Amsoil BMW Z3.

“I’ve been coming to the Runoffs as a spectator watching my dad since 1984, so this is probably almost my 40th Runoffs,” Prather said after moving one spot closer to his father, Kent, and his eight titles. “For me, my whole program is about prepping for this event. It’s kind of the way I was raised. To me, this is the pinnacle. This is when I get to race against John Hainsworth, who I never get to see during the year, or a John Brakke. Matt and I are in the same division, but this is when you get to race against the best in the country.”

The full course caution periods were an advantage for Prather, whose BMW seemed to be quicker in a straight line than Reynolds’ No. 71 Reynolds Bros. Racing/Vintage Connection Mazda Miata. Prather got the jump at each of the three green flags, including the start, and was able to keep the field behind him and grab the race’s fast lap in 1:49.928 (84.885 mph). That made all the difference in the run to the checkered flag.

“If this race would have gone green, I don’t know that I would have been able to hold Matt off,” Prather said. “I would have had to make that BMW awfully wide. If he had gotten around me early in the lap, it would have been all over for me, and I’d have been racing for second. It is what it is, this is racing and that’s how it goes sometimes. I turned out on the lucky side of things today.”

Reynolds’ Miata got swallowed up in each of the green flag situations. Though he deftly carved his way around either or both of Jon Brakke’s BMW and Hainsworth’s RX-7 in the first two corners each time, it gave Prather enough time to sneak away and hold the position long enough for another caution period to come out, only to repeat the process.

The podium is the sixth of Reynolds career, and a repeat of 2020 at Road America where he scored a silver medal behind Prather.

“Second place is great,” Reynolds said. “I’m definitely happy with it. I would have liked to see it green all the way, I could tell Jesse’s car was sliding a little bit when we had a few lap runs in between those yellows, it just didn’t go in our favor. Being that in 2017 I didn’t even finish the race, it’s great to be up here and racing with these two guys. I ran two different races — one on the restarts with John, and he’s a great driver, and then I’d get ahead of John and it was trying to track down Jesse.”

Hainsworth’s No. 95 Turf Trade/Hoosier/Carbotech Mazda RX-7 was, along with fourth finishing Brakke, one of the cars who could catch Reynolds at the green flag but didn’t have the pace to run with either of the top finishing drivers. He battled early with Brakke, then was able to get some breathing room to secure his third Runoffs trophy. After a challenging week, which included only a Monday qualifying session due to mechanical issues, a podium is worth celebrating.

“As good as it runs all year, you never know what’s going to happen at the Runoffs,” Hainsworth said. “We worked on it until 1 a.m. on Thursday night to get a hardship lap on Friday. A podium feels like a win.

“Indianapolis is such a special place for my family. I’ve been coming here since I was 14 years old. It’s still the track I’ve been to second most in my life. My uncle has been coming here since the 60s. To be here on hallowed ground, it feels like we’re keeping a family tradition alive and maybe stepping it up a little bit to be in the media center and being interviewed. It’s pretty special.”

Peter Norton in a Caterham 7 completed the race’s top five. Don Tucker captured the Sunoco Hard Charger, improving 12 positions to the finish from his 11th place start to earn the honor.