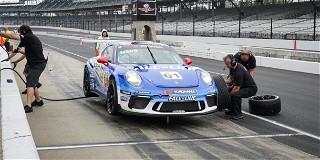 The first two laps of the race ran under yellow after one car had a mechanical issue and spun on the pace lap. Oddly, the additional time spent behind the pace car changed the very nature of the race. During those two laps, rain began falling. That prompted Thomas Herb, who started 13th and was driving the only Porsche, to dive into pit lane for rain tires. After the tire swap, he caught the rear of the field under yellow — and hadn’t lost a lap.

On what was now a wet track, the green flag waved to begin lap three, and the heavy GT-1 cars headed down to Turn 1. Lewis’ start was not great, and David Pintaric of Canfield, Ohio, drove to the lead in his No. 57 Kryderacing/Ave Motorsport/Goodyear Ford Mustang. Behind Pintaric, Jordan Bupp and his No. 3 Bupp Motorsports/Palm Express Chevrolet Camaro got bumped around a bit in Turn 1, but emerged in second. Additional action in Turn 1 on the first racing lap, however, claimed a couple cars — including Lewis who couldn’t continue.

That brought out another full-course yellow until lap six. It was on that lap, at the exit of Turn 6b, where Pintaric spun in the wet, and out of the lead. Bupp assumed the top spot, followed by K. Dane Smith, and Pintaric got going again to hold third.

Meanwhile, Herb was carving through the field in his No. 61 Fall-Line Motorsports Porsche 991.2 GT3 Cup car. He was fifth on lap six, fourth by lap seven, second by lap nine, and swooped into the lead by the tenth lap. Even though the rain subsided in the later portions of the race, nobody had anything to catch Herb. The driver from Barrington, Illinois, drove off to the checkered flag, and a winning gap of 72 seconds, in what ended up being a timed race lasting 40 minutes. For Herb, this is his first Runoffs win — and the first-ever GT-1 victory for Porsche. Herb also gathered up the Sunoco Hard Charger award in his push to the front of the pack.

“It probably took us about 45 seconds or so to change tires, then I was at the back of the pack before we went green,” Herb said about the strategic moment that won him the race. “The Porsche is an amazing car to race, number one, and it’s really amazing in the rain.”

Well behind Herb, Pintaric was skillfully wheeling his car — still on slicks — in the wet and worked his way around Bupp to claim second place on the tenth lap. He held that spot for the back half of the race and came home in the runner-up position, earning his second Runoffs podium.

“I was hoping for a dry line,” Pintaric said after the race. “I couldn’t beat Herb on rain tires. Even if I had rain tires, I wasn’t going to beat that Porsche. We do a lot of Trans Am races in the rain and I’m pretty good at that. But slicks and rain is just a bad deal.”

Bupp, from Fort Lauderdale, Florida, and running on slicks, was unchallenged during the last half of his race. He secured the final podium step in GT-1 for his first Runoffs podium appearance in just three starts.

“Unfortunately, I kind of got what I asked for,” Bupp joked after receiving a bronze medal around his neck. “I said I’d love to drive against these guys in the wet, but I totally forgot about Tom (Herb), the wildcard, in the Porsche. He deserved to win. He did a great job. He raced David (Pintaric) and I clean all the way around.”

Photo caption:  Thomas Herb's crew swaps the No. 61 Fall-Line Motorsports Porsche from slicks to rains as the field comes under caution on the pace lap in the GT-1 Race, with rain incoming.