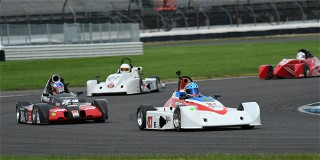 Sven de Vries, of Holt, Michigan, battled to his first championship at the 58th SCCA National Championship Runoffs in Formula 500 this afternoon on the Indianapolis Motor Speedway road course. The newly crowned champ was chased to the Runoffs podium by Ryan Mayfield, of Orlando, Florida, and Calvin Stewart, of Novi, Michigan.

The race was a thriller, with de Vries and Mayfield exchanging the lead no fewer than seven times in nine green-flag laps between the race’s first restart on lap eight and the final yellow. When the final yellow came out, the duo was essentially side by side in the Turn 6 area of the track.

That was fortunate timing for de Vries, who had made the pass through the Turns 1 and 2 complex in his No. 27 Green Hawk Computers/Linn Racing Novakar J9/Suzuki. Mayfield was battling back when the yellows came out, effectively ending the race early.

The win was the first for de Vries, whose only other Runoffs appearance was a silver medal at the Indianapolis Motor Speedway in 2017.

“Doing all of this here at Indy is a childhood dream come true,” de Vries said. “When I was a kid I would watch racing from behind the fence and just picture what it would be like to be in the car. Now to be here in first, I’m speechless. It means the world to me. If this was my last race, I can be happy that I accomplished this and measure myself with the likes of Calvin, who is a champion, or Clint McMahan, and now Sven de Vries is one of them. I’m lost for words.”

Mayfield led the opening stanza from the Tire Rack pole position, but had to start his march to the podium in the No. 34 VRS/Satellite Racing Scorpion S1/Suzuki all over again when a full course caution came on lap five. He lost the lead to de Vries on the lap eight restart, then regained it in Turn 1 one lap later. The eventual winner took the lead again on lap 12, but in a repeat, Mayfield was quicker down the front straight and reclaimed the lead on lap 13.

The process repeated on lap 14 and 15, with de Vries moving back to the front in the twisty sections and Mayfield moving to the lead in Turn 1. Mayfield was hoping for one more opportunity down the front straight to earn the win in his first Runoffs appearance, but it was not meant to be.

“I don’t even know where to begin,” Mayfield said. “That race was amazing. I was smiling every single lap and even when he passed me, I wasn’t upset. We kept it super clean, and I think we put on the best dang race of the weekend. That’s what we’re here to do. Everyone wants to win but if you can’t win you want to have a hell of a fight for that win. I’ll still be smiling on the plane ride home. You can think however much you want on what could have been if the timing was one lap or two later, but it is what it is, and I think you have to appreciate how far we’ve come.”

Stewart, a champion in his own right, flew into second at the start but spent his race in a battle for the final podium position. Stewart, Aaron Ellis and James Weida spent the latter half of the race nose to tail, with Stewart coming out in front to earn his fifth podium finish. Ellis and Weida crossed the stripe in order behind Stewart to complete the top five.

“It’s just wonderful to be up here with these guys,” Stewart said. “At the start I got a little loose coming onto the straight and stuck two wheels in the mud and got really sideways. Luckily, I was able to collect it, but they were able to gap me and they put the hammer down. I have to give kudos to the boys; they really threw a party and I was just glad I was a part of it.”

Keith Joslyn, who finished sixth after starting 12th, was awarded the Sunoco Hard Charger award for gaining the most positions during the race.