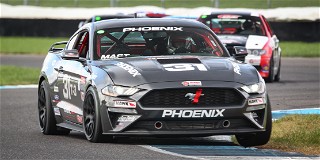 Turn 1 on lap one presented several deciding moments during the 2021 Runoffs. This race was no different as Jason Ott, in the No. 09 Alpine Motorsports/Hoosier BMW Z4 M, tried to make Turn 1 a salient moment in the T3 race, as he battled Mast for the lead. Alas, Mast held tight in the No. 31 Phoenix Performance Ford Mustang EcoBoost.

If any of the other 22 competitors had hopes of challenging Mast for the win, those dreams were dashed in short order as he quickly moved to a seven-second lead after a handful of laps. He maintained that gap right through the checkered flag, successfully defending his T3 National Championship for his third-ever victory.

“I was pretty nervous about this one,” Mast admitted. “But the cloud cover and the cool weather helped. That allowed this big car to hold on for 19 laps. I had to back it off a little bit with five laps to go and navigating traffic, and it got pretty slick. But, man, that was fun!”

Further back in the field,  Breton Williams of Clinton, Iowa, had started eighth but was chopping his way through competitors. He was seventh after lap one, sixth after the second lap, fifth by lap three, and fourth by lap four. On lap 5, Williams put his No. 52 OPM Autosports Nissan 370Z Nismo into third place and started to close in on Ott who seemed to have a comfortable hold on second place. However, the performance of Williams’ car began to fade. Ott, from Littleton, Colorado, then scurried away to a runner-up finish. That’s his fifth podium appearance at the Runoffs.

“It’s always satisfying to be in the top three because there are a lot of fast guys here,” Ott said about earning his silver medal. “This is my third time finishing in this position. I’m getting tired of it. I’d like some gold for once. But I’m really happy with this. We drove hard.”

As Williams’ Nissan faded, he fell into the clutches of Chris Hart from Yakima, Washington. Hart, driving the No. 5 Fab Tek BMW SpecE46, had been passed by Williams earlier in the race, then spent a chunk of time battling for fourth with Eddie Nakato in the No. 82 AR Motorsports/Cobalt Brakes BMW 330i/ci. Once Nakato had been dispatched, Hart turned his attention to Williams. On the last lap, Hart went around the outside of Williams in Turn 1, then drove confidently to a third-place finish and his first podium appearance at the Runoffs.

“The car kind of came on at the end,” Hart said. “It was a little too tight at the beginning. Once I wore the rears out a little bit, it was good. But this was a blast. We were doing battle the whole time, so it was a good time.”

Williams held on to finish fourth. And if it’s any consolation, he also set a new T3 Runoffs race record by turning a 1:52.701 lap. Nakato finished fifth. The Sunoco Hard Charger award was earned by Paul McNamara, driving the No. 56 Reed Nissan/iRide Used Cars Nissan 350Z Nismo, who started 23rd and finished in the 18th position.