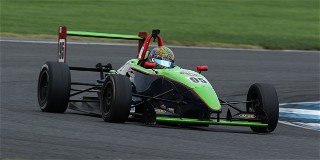 The 26th and final race of the 2021 SCCA National Championship Runoffs on the Indianapolis Motor Speedway road course demonstrated that the event — in its 58th year — has a bright future.

Vaughn Glace — the senior driver among three first-time Runoffs rookies on the podium — won the Formula X race that closed out the three-day festival of amateur road racing this evening. The Pittsburgh resident bested fellow teenagers Trevor Russell and Austin Hill over 19 laps at the historic venue, which hosted the Runoffs for just the second time this year.

Russell, from Tucson, AZ, stole the lead from Tire Rack Pole Award winner Glace at the start and held it through most of the first two laps. But Glace cleanly out-braked Russell into Turn 12 to reclaim the top spot.

From there, Glace extended his lead to 2.4 seconds on the eighth lap, only to see Russell begin to reduce his advantage by 0.1 to 0.3 second per lap.

Russell cut the gap to under a second on the 14th lap as Glace began to work through traffic. As Russell came up behind the same lapped cars, Glace was able to manage his cushion over the final few laps, taking the checkered flag with a 1.363 second advantage.

Hill, a resident of Frankfort, OH, finished 11.301 behind, followed by Tao Takaoka and Robert Wright. Ryan McLaughlin advanced from 13th to 9th to earn the Sunoco Hard Charger Award.

“I didn’t get the start I wanted and obviously lost out into Turn 1,” Glace recalled. “I tried to put a big lunge on [Russell], and it kind of worked and kind of didn’t. I had to get in the groove of things to feel the setup changes we made on the car after qualifying. Once I got in front and to lap five and my spotter was telling me the gap, I felt pretty confident.”

He didn’t have it easy, though, because Russell kept the pressure on Glace, who locked his right front wheel several times under braking.

“Once I built a gap to Trevor and got settled in, it was a pretty sharp learning curve to figure out what the car needed and how to drive around it,” he said. “That quickly changed because the rear of the car started acting differently throughout the race. It was damage limitation in my head, and we did a pretty good job of it. We kept our head in and kept pushing forward and it all worked out.”

Russell admitted that encountering traffic late in the race blunted his charge. “The car started feeling better in the middle of the race,” he said. “I made some sway bar adjustments and that got me a little more pace. I fell into a groove, and it seemed to work out pretty well. I’m very pleased.”

At 14, Hill had the opportunity to become the youngest race winner in the 58-year history of the Runoffs. “I feel pretty good,” he said. “My dad gave me a great car. I did my best to stay with Vaughn and Trevor, but ultimately, they were faster than me and I couldn’t get around the lapped cars as easily. But it feels great to be up here on the podium.”

Photo caption: Vaughn Glace leads the charge in FX to take his first SCCA National Championship as a Runoffs rookie.