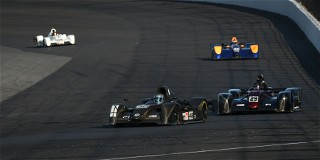 The first of three Hagerty Race Days wrapped up at Indianapolis Motor Speedway (IMS) late Friday afternoon with the Prototype 1 (P1) race at the 2021 Runoffs. Part of the 58th SCCA National Championship, the P1 class is one of the fastest and was led to the green flag by Tire Rack Pole Award winner Lee Alexander of Springfield, Tennessee, in the No. 48 One Motorsports/Factory48 Stohr WF1 Suzuki.

Right after the start, Jim Devenport of Alamo, California, drove his No. 23 Cranbrook Group Inc Elan DP02 Mazda around the outside of Alexander’s car in Turn 1 and assumed the lead. That, however, didn’t last as Alexander dove inside of Devenport in Turn 1 to regain the top spot on the third lap.

From that point, Alexander put his head down and pounded out lap after lap. By midway through the race, his lead was 3.1 seconds over Devenport. And when Alexander crossed the finish line first after 19 laps, his lead had extended to 10.297 seconds. For Alexander, this was his second Runoffs win. He also turned a 1:29.225 lap during the race to reset the P1 Runoffs record at IMS.

“I think I was a little tentative on the brakes, and Jim just got around me,” Alexander said about the pass that dropped him to second at the start. “I had to try and regroup and not worry about it too much because this is a long race.”

Back in second, Devenport tried to run a smart race, saving his car and tires to take a run at Alexander. About two-thirds through the event, he decided to push his car and give ‘er a go − but it became evident that he wasn’t going to close the gap. So, he gladly settled for a runner-up finish and his fifth podium appearance at the Runoffs.

“We got the start we wanted, but Lee was really quick,” Devenport said. “We ran as good as we could, then I made one final push. I dropped tires a couple of times, lit them up a couple times… then it was like ‘all right, I’m going to try and hold station now.’”

Behind Devenport, Chip Romer of Lake Havasu City, Arizona, sat third the whole race in his No. 29 Elan DP02 Mazda. He was challenged for a bit around the 5-turn, 2.592-mile road course by the No. 46 Swift 014 Toyota of James French, but kept cool and secured the final podium spot. That’s his second podium appearance at the Runoffs in five starts.

“That was a long race. I was counting the laps,” Romer said during his post-race interview. “We had a little overheating problem, but made it through. So, we’re all good.”

French, the defending P1 national champion from Sheboygan, Wisconsin, finished in fourth; and John Mcaleer of Roswell, Georgia, finished fifth in the No. 88 CAS Group/Elan Power/Comprent Elan DP02 Mazda after battling for some laps with Jason Miller and John Manfroy. The Sunoco Hard Charger award went to David Locke for starting 12th and finishing ninth.