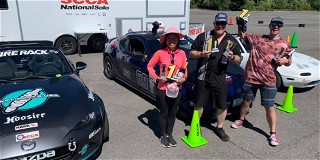 The old Hampton Mills Lumber Yard in Packwood, Washington has long been a favorite of SCCA Solo competitors. With a covered “grid” and gorgeous surroundings, Packwood draws all sorts of autocrossers. And every now and again, autocrossers at Packwood draw the attention of locals — which happened during the recent Tire Rack Packwood ProSolo as a small herd of elk wandered from lush woods and out into the open course area to see what SCCA members were up to this year. The wildlife, as well as humans in attendance, were treated to some fantastic excitement.

B Street had Jason Bucki, in a BMW M2, take a very late lead on Saturday with a fast last run that put him into a 0.063 lead. Sunday, James Paulson came out of the gate swinging in his Chevrolet Camaro. He took the lead on his first left-side run Sunday and held on to it for a win by 0.21 second over Bucki. Piotr Szarkowicz, in another BMW M2, finished third.

Ladies 2 saw Ewelina Szarkowicz lead in a BMW M2 from start to finish. But the big story was Dawn Danton who was in fourth at the end of day one in a Ford Focus RS. She found a ton of time on her last runs Sunday to jump up two spots and finish just 0.171 second off Szarkowicz. Deanne Carter, in a Scion FR-S, was third; and Jessica Yeung, in a Mazda MX-5, took the last trophy spot.

In his first national event, Oliver Taylor drove a Mazda Miata to victory in Street Touring Sport. Taylor had some early issues Saturday with cones and red lights, but cleaned that up in the afternoon to grab the lead, which he never relinquished. Brent Glad drove a Honda CRX Si to the runner-up spot 1.247 seconds back, and Kameron Clements finished third in another Honda CRX Si.

Kevin Dietz drove a Scion FR-S to victory in Solo Spec Coupe. His co-driver, Theron L’Angel, came back from fourth to finish second, picking up 1.1 second on the right side alone, actually beating Dietz on that side. Turns out the two formulated and executed a plan that catapulted L’Angel up in the order, which is some truly amazing teamwork. Nicholas Johnson finished third.

In Street 2, Keith Brown led after Saturday in a Porsche Cayman GT4 car. However, he only improved on one side during Sunday runs. That opened the door for Stacey Molleker, in a Chevrolet Corvette, who found the lead and secured the win after great runs on both sides. Tony Rivera, in a Mazda RX-7, finished second only 0.082 behind Molleker; and Brown settled for third.

Let’s Get to the Challenges

Super Challenge: It was CAM’s Brian Coulson vs. SSC’s Kevin Dietz for ultimate supremacy in the Super Challenge final round. Coulson used his Chevrolet “Calvette” to get around the CAM Chevrolet Corvette of David Rock in the semifinal, and Dietz dusted Street 2’s Tony Rivera to earn his spot in the final. It was a red-light final run for Coulson, which gifted Dietz the win.

An Express Trip to Toledo Upcoming

It’s a quick turnaround for Tire Rack ProSolo as the series quickly heads east from Washington to the Northwest quadrant of Ohio for the Toledo ProSolo taking place July 23-25 at Toledo Express Airport in Swanton. Remember that live timing is available here, and follow storylines as they develop at the SoloMatters Facebook page.