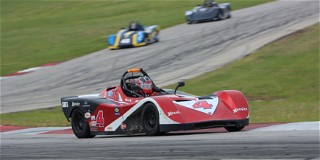 Sunday wrapped up Hoosier Racing Tire SCCA Super Tour competition from Hallett Motor Racing Circuit in Jennings, Oklahoma. This was the sixth race weekend of 2021 for the Hoosier Super Tour, with this event hosted by SCCA’s Ark Valley Race Group. Sunday races were either 35 minutes or 27 laps in duration.

The SRF3 Struggle is Real: Honors for having the largest field at this weekend’s Hoosier Super Tour went to Spec Racer Ford Gen3 (SRF3). With just short of 40 entrants, the action was constant and exciting both Saturday and Sunday on Hallett’s 1.8-mile, 10-turn circuit.

Grayson Strathman and his No. 119 Shock Top Beer SRF3 car took the win Saturday. He has a great deal of experience at Hallett, so coming home the victor wasn’t all that surprising. But after the week he had, the victory was extremely rewarding.

“I put it in the wall at VIR coming up the Esses trying to battle for second place with Clay on the last lap,” Strathman recalled. “I had a pretty wrecked car. It was the hardest wreck I’ve ever had.”

The damaged vehicle was hauled back to a shop in Oklahoma City, and work began to get the car race ready in only a couple days.

“I was fixing the car in the rain on Friday, practice day here at Hallett,” Strathman continued. “But I got it back together and got it to where it’s running all right and was able to make it work.”

“There at the start I got pushed a little wide and ended up fifth coming out of turn two,” Strathman said about Saturday’s performance. “But I managed to get back to second place after a couple laps.”

That brought Strathman up to the tail of Stripling who was leading. The duo encountered some traffic and worked together to manage the situation. But with only a couple laps left in the 25-minute race, an issue arose.

“One of the guys we caught, Denny ended up catching the back of his car a little bit, then I went into the back of Denny,” Strathman said. “That knocked his tail off and he pulled off after that, and I was able to take the win.”

“It’s been a challenging couple of weeks. But I’m glad to have the result to back up all the hard work,” Strathman said with a grin.

On Sunday, Denny redeemed himself with a hard-fought win in the No. 4 Lightspeed Motorsports car. Richard Stephens, who led a great deal of the race, finished in the runner-up spot only 0.298-second back. Strathman rounded out the podium in third only 0.775-second off the leader.

“As races go at Hallett -- and I’ve been racing here a long time, longer than I care to admit -- that’s maybe the best race I’ve been involved in,” Stripling said during victory podium celebrations Sunday afternoon. “We have so many incredibly fast, young, up-and-coming drivers in the class. Which is what this class was really built for.”

Truckin’ Troubles: Californian Taz Harvey made it to Oklahoma this weekend for the Hoosier Super Tour, but not without some obstacles. Back in February, Harvey took part in the Hoosier Super Tour at Buttonwillow Raceway Park. But when they tried to leave after racing was completed, hauler troubles struck Harvey and his vehicle had to be towed to Bakersfield, California, for some cam gear fixes. When the repair job was done, Harvey’s hauler headed for Jim Downing’s shop in Georgia to pick up some cars. However, that didn’t happen.

“It made it to Kingman, Arizona and had the same problem,” Harvey said. “The truck is currently stuck there.”

So, what do you do if you planned to make a race weekend in Oklahoma? You hatch a creative plan, of course. First, you get your van from Northern California. Next, you drive to Kingman to pick up a trailer. Third, you call Jesse Prather in Topeka, Kansas, who has been working on one of your three SCCA racecars over the winter and ask if he can deliver it to Jennings, Oklahoma. Fourth, you prepare to compete at Hallett Motor Racing Circuit in both GT-3 and F Production (FP) using the same No. 88 Dublin Mazda/Hoosier Mazda Miata. Then when racing wraps at Hallett, you pack the car up and tow it back home to just outside San Francisco.

For most people, this may seem like a tremendous amount of work for a race weekend. For Harvey, however, skipping race weekends is not on his “to do” list.

“If I didn’t do this SCCA racing, I’d need a padded room. I would just go nuts,” Harvey admitted with a charming grin. “I have a lot of different things I do as a car dealer. This is one time I can get out and not completely worry about all that stuff.”

On Saturday, Harvey was unable to finish the FP race, which was won by Eric Prill in the No. 7 Children's Miracle Network/Hoosier/JPM/Carbotech Mazda Miata. In GT-3, Harvey finished fourth in a race won by Luis Rivera in the No. 12 RPM/Mazda/Hoosier/Roy's Speed Shop Mazda RX-7.

Sunday brought Harvey better results in FP as he finished eighth with Prill sweeping the weekend as far as victories in the class. And in GT-3, Harvey trophied after finishing second to winner Darren Brown in the No. 74 Mazda RX-7 car.

Classy GT-X: Late in 2018, the Sports Car Club of America announced creation of a new GT-X class for the Summit Racing Equipment Road Racing program. The class is designed to capture internationally-homologated and tube-frame cars outside other SCCA road racing classes. Eligible cars include those homologated to FIA GT3, SRO GT4 and TCR specifications. While not eligible for Runoffs competition, GT-X vehicles are able to compete in the Hoosier Super Tour.

Not every Hoosier Super Tour weekend is blessed with these beautiful GT-X car types. But this weekend at Hallett we had in attendance the No. 134 Aston Martin Vantage GT4 of Michael Young, the No. 26 Porsche 718 GT4 of William Hayes, and the No. 38 Norwood Auto Italia Maserati Trofeo GT4 of Colin Cohen. And it was Cohen who excelled this weekend with GT-X victories both Saturday and Sunday.

“We found the car as a refugee from World Challenge,” said Cohen, who has owned the Maserati racecar two years now. “We did some work to make it reliable, and it’s been great fun to drive. It’s a really easy car to drive.”

More information about the Hoosier Racing Tire SCCA Super Tour from Hallett Motor Racing Circuit, including full results, can be found at the event webpage.