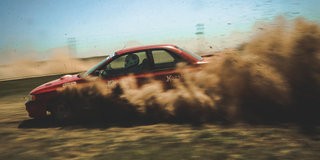 The 2019 DirtFish SCCA RallyCross® National Tour has concluded with the Mid-America Challenge taking place two weeks ago at the Lucas Oil Speedway in Wheatland, Missouri. The weather was blistering hot with heat indexes of over 100° but a breeze throughout the day kept dust blowing off the track and made the heat bearable.

The course was laid out in a grassy field next to the Speedway’s drag boat lake. Half of the course had gravel under the grass while the other half was compact dirt. It held up well throughout the day with just a couple adjustments being made to corners where competitors were really letting it hang out, sliding sideways and digging ruts. Traction was easy to find and consistent through the event unless you ended up in the soft loamy sections on the outside of the big sweeping corners where cars were getting sideways and throwing loose dirt.

The first course Saturday morning had a couple tight corners between some medium straights and broad sweeping corners. The afternoon course was a little longer and more open, allowing for faster speeds resulting in nearly the same lap times. Sunday’s course linked the fastest parts of Saturday’s courses, making it the fastest and longest course of the weekend.

David Williams and the rest of the organizers from the Kansas City Region SCCA did a great job getting the event started on time and keeping it flowing allowing for five morning and four afternoon runs on Saturday and four runs in on Sunday.

Competition was fierce in Stock Front class as Donald Carl suffered a DNF penalty on his first run for missing class inspections while Will Geyer hit five cones for a ten second penalty on the first run. Geyer got another cone on his third and seventh runs while Carl got one on his sixth. Carl clawing his way back from his first run DNF squeaking ahead of Geyer taking the first-place trophy by a mere 0.056 seconds on his final run.

Stock Rear had four competitors with Aaron Holstrom taking the win with a just over 13-second lead over Jan Gerber in the second and final trophy position. Out of the two competitors in Stock All, Josh Armantrout secured first place in commanding fashion with a 33.412 second gap over Noah Quick in second place. Robert Seelig took first in Prepared Front with Jim Rowland just 4.853 seconds behind in second place in the four-driver class.

There were five competitors in Prepared Rear with Austin Dowda taking first place by 8.097 seconds.  Howie Johnson claimed the second and final trophy position. An honorable mention in this class goes to Reuben Samuels who just 12 weeks ago got a lung transplant due to Cystic Fibrosis. He found out a mere four days before the event that he was cleared to compete. He was racing for two organizations that have made his journey possible, the Midwest Transplant Network and Donate for Life.

Mark Hill took first place in Prepared All by 13.112 second over Mark Macoubrie in second. Mike Coons took the third and final trophy in the class of seven. In Modified Front, Jason Lang ran away with first place with a 16.173-second lead over Bret Hunter in second. Modified Rear had five competitors with Vaugh Micciche taking first place by a commanding 40 seconds over Doug Leibman.  In Modified All, Jason Fuller had a whopping 54-second margin of victory over Collin Oelkers to take the win. Jorge Gonzalez only missed out on a trophy by 3.631 second, finishing third.

With the Mid-America Challenge in the books it’s time to prepare for the DirtFish SCCA RallyCross National Championship in Indianola, Iowa at the National Balloon Classic Memorial Balloon Field on September 20-22nd. Registration opens this Thursday, August 1st. The event is expected to sell out, so remember to register early!