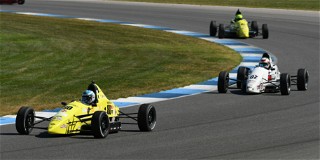 Indianapolis, Indiana (September 29, 2017) – Nineteen-year-old Matt Cowley, of Tampa, Florida, outlasted a gaggle of other young competitors for a Formula F National Championship on Friday at Indianapolis Motor Speedway during the SCCA Runoffs. Seventeen-year-old Zach Holden, of Abbottstown, Pennsylvania, and 23-year-old Jonathon Kotyk, of Atlantic Beach, Florida, joined Cowley on the podium after spending time at the front of the field.

Cowley’s No. 80 Team Pelfrey/Gap Guard Mygale FF/Honda crossed the stripe just 0.659-second in front of Holden, averaging 79.905 mph over the 19-lap race that was slowed twice for three laps under full course caution.

The win was the debut for the aspiring professional open-wheel racer, who officially led eight laps during the race.

The draft was a key component of the race, where the trailing two drivers in the pack got a pull down the front straight, across the yard of bricks, and into Turn One, where lap after lap the youngsters fanned out and swapped positions. Each of the three spent time on the point.

The advantages of the draft became a disadvantage with one to go, however, as 14-year-old Yuven Sundaramoorthy’s No. 45 K-Hill Motorsports Mygale FF/Honda and veteran racer Bob Perona’s No. 78 BPMS Piper DF3D/Honda made the battle a five-car dash for the final 2.592-mile run around the circuit.

But Sundaramoorthy spun in Turn 13, and Perona slowed to miss him, sliding back out of the podium positions. With Cowley up front through Turn One on the final lap, he held off his race-long dance partners and took the green flag.

“It’s an unbelievable feeling to be crowned a champion,” Cowley said. “It just feels amazing. There’s not really a typical lap, it’s just pack racing and anything can happen at any time. The mentality for me is to get to the front and stay out for as long as possible, but I struggled to keep up with the front runners so I was third for quite a lot of it. When it came down to the checker, I got in the lead down the front straight so I just went to the inside to protect my line. I wanted to make sure I was first going into Turn 1 as well, and then the same down the back straight. There was a lot more battling going on, and I tried to defend and keep my position and fortunately came out on top.”

Holden was sandwiched between the two teammates, and was pleased with his maiden Runoffs appearance in the No. 02 K-Hill Motorsports Mygale FF/Honda.

“That was a heck of a race, all the way around,” Holden said. “There was maybe one lap that we didn’t pass. I tried my hardest to stay out in front and did it sometimes, and sometimes didn’t. That last lap, I didn’t defend the best. Jonathon and Matt got me, and I thought it was over after Turn 1 because they pulled a gap on me. Coming back into Turn 7, they were battling really hard and I just went around the outside. I went a little bit deeper to pick them both off, but didn’t quite get it.”

Kotyk, too, had opportunities, but didn’t catch quite the right breaks after moving the No. 81 Team Pelfrey/Gap Guard Mygale/Honda forward from his eighth position on the grid.

“I wanted to play it smart,” Kotyk said. “I took some things from karting, and wanted to push it forward pretty quick and then play it smart. It was definitely the longest race I’ve done so far, so I just needed to be patient and then the yellow came out. That let me catch Matthew and Zach as well, and then just was able to push back up to the front. It was a battle from there to the end of the race, and a lot of fun.”

Christopher Horan’s No 24 Steelfiber.com/Primus Racing Van Diemen RF00/Honda snuck through the spins on the final lap to finish fourth, with Perona recovering for fifth.

Meagan Sauce Hutton improved 15 positions from her grid position in the No. 40 Sportscar Performance Swift DB6/Honda to earn the Sunoco Hard Charger award.

While the live broadcast of all 28 National Championships is available at SCCA.com and Motor Trend OnDemand, each race will be on demand in the coming weeks.