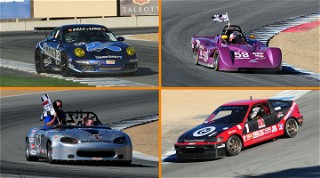 TOPEKA, Kan. (January 20, 2015) – Four SCCA road racing superstars have been named finalists for the 2014 President’s Cup, presented annually to the driver demonstrating ability, competitiveness and success at the SCCA National Championship Runoffs®. The winner will be announced from nominees Andrew Longe, Lawrence Loshak, Matt Reynolds and Cliff White (in alphabetical order) at the 2015 SCCA Hall of Fame and Awards Banquet presented by Mazda on February 21 in Charlotte, North Carolina.

For the first time, the winner of the year’s top Club Racing driving honor will be announced from a pool of finalists at the same banquet that inducts this year’s SCCA Hall of Fame class.

“The President’s Cup winners contain some of the all-time greats in motorsports history, so Andrew, Lawrence, Matt and Cliff deserve a hearty congratulations just for the nomination on the heels of their National Championships,” Lisa Noble, SCCA President & CEO, said. “This year we get to recognize a larger class of future SCCA legends at the same time as our current class of Hall of Famers, and that attention is absolutely warranted.”

Longe, of Naples, Florida, earned his nomination with a Touring 2 victory at Mazda Raceway Laguna Seca in the No. 02 Trianon/FALL-LINE Motorsports Porsche 911. Longe battled for his first National Championship with Kyle Kelley, eventually winning by just 0.047-second, the fifth-closest Runoffs finish in the modern transponder era.

Loshak, of Grafton, Wisconsin, won a drag race to the finish line over Jason Isley in H Production to defend his title in the No. 1 ETE Reman/HYPERformance/RWM/Hoosier Honda CRX and earn his fifth-career gold medal. Loshak’s title came by just 0.189-second, and he led 19 of 20 laps in the race.

Also included in the banquet are the Solo Driver of the Year, the SCCA Member of Excellence, the RallyCross Dirty Cup, and the Woolf Barnato Award.

The MSX Expo and SCCA Convention will be held at the Charlotte Convention Center February 20-21 and the SCCA Hall of Fame celebration will be Saturday, February 21 at the Hilton Charlotte Hotel. Hotel cutoff for special rates has been extended to January 27; reservations can be made at https://aws.passkey.com/g/27699140 online or by phone 877-667-7213.

For more information or to register, visit MSXExpo.com. Tickets for the SCCA Hall of Fame and Awards Banquet are $100, and SCCA Members can include either the SCCA National Convention or the MSX Conference, complete with speakers designed to improve motorsports skills, for an additional $95. Admission the MSX Expo show floor is free for SCCA members.